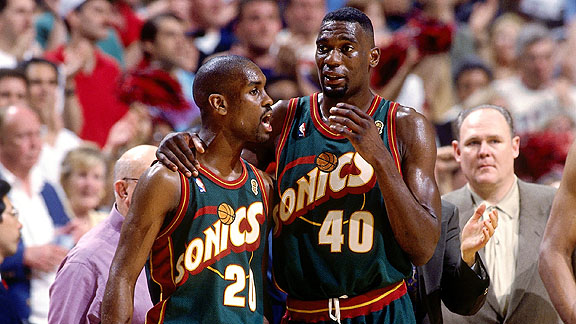 Well, Almost Back. My Wife called me to tell me the News about the Sacramento Kings being sold to Seattle today. I was working so she was excited to be able to break the news to me first since i'm always first on major news in the Family. I got off the Phone, checked my Facebook timeline, No Word. Checked ESPN, No Word.. Then I went to NBA.com and there was a slight story brewing about the team being sold by the Maloofs to Hansen and a Seattle Group. Next thing i checked was the Roster of the current Sacramento Kings team. 2 Players stood out.. Aaron Brooks & Isaiah Thomas.. How cool would that be for two Seattle Natives to be back home for the home team. The Sonics were the 1st Major Sports team I watched when I first moved to America from Kenya. I remember sitting at a table with my father eating Wheaties learning about Michael Jordan from our 1st American Friend. He then went on to tell me stories about The Super Sonics that we had. All of this was amazing to a 9 year old in a new Country. Later on in Life I would meet Shawn Kemp, Gary Payton in pickup games in the Central District. I remember sophomore year in High School when we played against the Bulls in the Final. Having the team back would bring back some great childhood memories and build some new ones as well. Even though I live in Phoenix and have cheered on the Suns the past few years, One thing that has remained is our mutual Dislike for the LA Lakers. :) So far No major sites have confirmed that it's all true, but after having Mixed feelings last year watching the Thunder play in the NBA Finals 4 years after being removed from Seattle i'm ready to root for a "Sonics" Team. Maybe it took us watching our old team we took for granted to go to the Big game to light a match under us to be excited again. Hopefully it all works out and Seattle gets a basketball team to cheer for again. Thank You God Bless ------------------------- Being Kind: The Music Video That Circled The World Posted on October 02, 2013